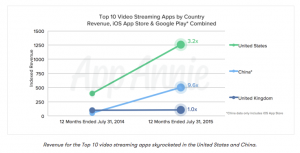 Video apps are experiencing significant revenue growth in the US and China, according to new research.

Combined revenues from the top ten streaming apps in the US and Cina have grown by multiples of 3.2 and 9.6, respectively, the App Annie research showed,

Subscription on-demand services HBO Now and Hulu provided the “vast” majority of the revenue growth in the US, while China’s growth was attributed to “strong uptake of the iPhone 6”.

App Annie said the US growth suggested “the rise of cord-cutting and unbundling” of cable services.

The lack of growth in the UK was attributed to “the structure of its traditional television industry in which free-to-air networks retain a prominent position”.

The most popular streaming apps in the US are YouTube, Netflix and ESPN, App Annie noted. In the UK, YouTube, the BBC and Sky Sports led the way, with Youku, Tencent and iQiyi the most-used in China.

The research noted the US had the most diverse set of video apps, “coming from a mix of internet pure plays, broadcasters, networks and sports leagues”.

China saw the most growth in iOS downloads, with the US and UK seeing relatively flat growth across the iOS and Google Play platforms.

China may see growth expand even further with the launch of Alibaba’s SVOD service Tmall Box Office, while niche services such as DramaFever and Crunchyroll in the US is creating “small-but-valuable” long-tail revenue streams.

Research author App Annie, which has raised funding from investors such as Greycroft Partners and Sequoia Capital, describes itself as “the largest mobile app intelligence service”. It analysed data over a 12-month period to extrapolate its findings.