US homes have an average 1.9 connected TV devices 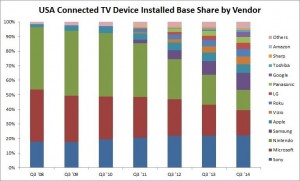 The average US home now has 1.9 connected TV devices, with ownership of this technology having grown by 28% year-on-year, according to Strategy Analytics.

The research firm said that ownership of devices including smart TVs, smart Blu-ray players, IP-enabled game consoles and digital media streamers was up by 5% quarter-on-quarter in Q3 2014 and 28% year-on-year, reaching 168 million units.

By device type, Strategy Analytics said that Google’s Chromecast topped the media streamer market in Q3 with 26% of shipments followed closely by Roku, with Apple slipping to third place having led the market at the same time last year.

In the smart TV market, Samsung dominated with a 35% share of units shipments during the third quarter, followed by Vizio, Sony and LG.

Sony led the US IP-connected games console market for the third consecutive quarter with just under 50% of unit shipments in Q3, though Microsoft has the largest installed base of consoles.

“Competition within the US Connected TV Device market is intensifying as device makers battle to be the gateway of choice for watching online videos on the TV screen,” said David Watkins, service director, connected home devices at Strategy Analytics.

“Heavyweight brands Google and Amazon have shaken up the market and have created a huge surge in demand for low-cost media streaming dongles. These devices may not provide as sophisticated an experience as an integrated smart TV but often provide a much faster and easier way for consumers to get access to their favorite online streaming service.”