Is BT’s flexible offer the answer to pay TV’s ills? 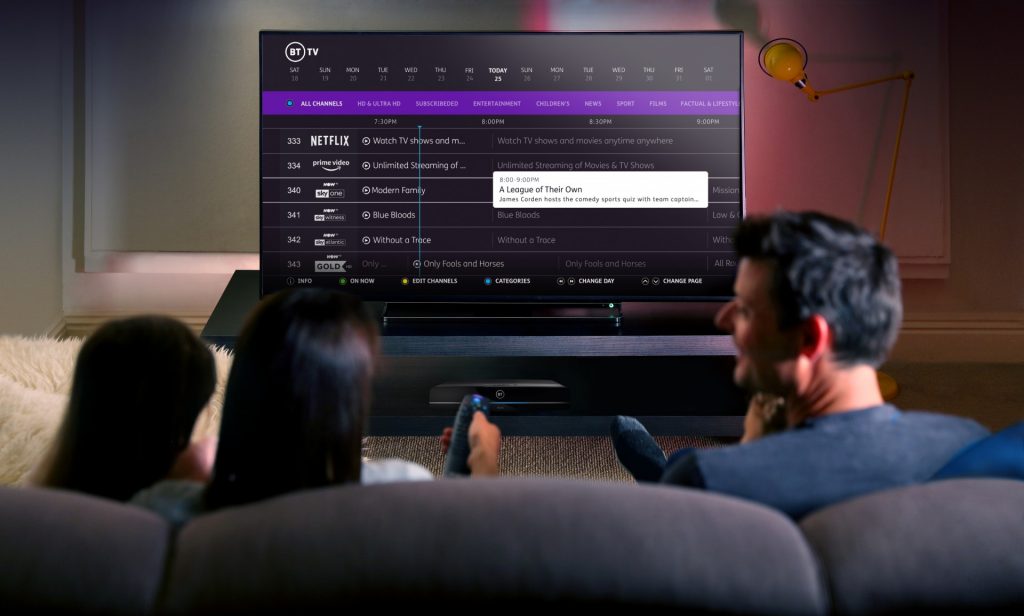 “As long as the pay TV incumbents continue to innovate, their services will remain sufficiently compelling to ensure their long-term success,” wrote Adam Thomas, lead analyst of global TV markets at Omdia in a Guardian piece from 2013.

While written almost seven years ago, this is the mentality that BT was banking on when it this week announced a revamped slate of ‘flexible’ TV packages.

Along with their accessibility and boundless content libraries, the selling point of many OTT providers is that it is almost as easy to sign up for a subscription as it is to cancel one. Netflix et al. often sell themselves on their flexibility – not to encourage churn, but to bring in sceptics and alleviate the concerns of users who have been burdened by long-term mobile, TV and broadband contracts. And for streamers which offer multiple tiers it is in their interest to make jumping between levels as quick and painless as possible.

As outlined by Fateha Begum, associate director, connected devices and media consumption at Omdia: “A key benefit of online video services is the ability to dip in and out of services to meet consumers’ content needs, particularly in a market where individual online services hold exclusive and original content not available elsewhere.”

By contrast, the treacle-like navigability of multi-year pay TV contracts can seem muddled at best and purposefully confusing at worst. It has historically been very easy to sign up and add on additional services at a rapidly snowballing cost, but users wanting to scale things back are faced with lines of T&Cs, boundless red tape and repeated marketing jargon. And don’t even think about trying to get out of a contract early without expecting to pay a small fortune.

This universal problem is perhaps more pervasive in the US where significant swathes of the country often have only one supplier who has no incentive to provide improved services or competitive pricing. A study from Kagan found that the average US pay TV bill in 2017 totalled US$100.98 per month – a figure that has likely increased in recent years.

It’s no surprise then that pay TV penetration is plummeting in the US, with providers losing a collective six million subscribers in 2019 – a 7% year-over-year loss. This is a significant contrast to the market in 2009, where pay TV penetration was at an all-time high of 87.8%. Pay TV penetration now stands at 65.3% of US homes.

Roku CEO Anthony Wood this week predicted that half of US households will be cord-cutters or cord-nevers by 2024 in what he dubbed as “the streaming decade” where “consumers around the world will choose streaming as their primary way of viewing TV.”

Of course, competition is much healthier in the UK and much of Europe than in the US, but the cord-cutting phenomenon is still starting to creep into these markets.

Most recently, Sky recorded a net loss of subscribers for the first time, shedding 98,000 pay TV customers across the UK, Ireland, Germany, Austria and Italy, having gained 304,000 in the previous quarter.

Overall, the EMEA region contributed losses of 660,000 pay TV subscribers to an overall global decline of over two million in Q3 2019.

Similarly this week, Liberty Global reported that its UK business Virgin Media lost 110,900 revenue generating units. Its overall video losses accelerated in the quarter to 91,300, worse than the 74,900 recorded in the same period in the prior year.

However, this tide is something that BT is looking to rise above with this latest throw of the dice.

Rather than those aforementioned traditional pay TV models, BT has rebooted with the flexibility of Netflix in mind.

Its contracts are still 24-months, but they are designed to allow customers to upgrade, downgrade and add bolt-ons – such as OTT players Netflix, Amazon Prime Video and Now TV – on a month-to-month basis.

Omdia’s Begum describes this as a pro-consumer move: “The ability to subscribe and cancel channel packages on a monthly basis follows the business model of online video services which resonates well with consumers and allows traditional channels and BT TV’s core pay TV business to compete more effectively. For consumers, online video apps act as channels, particularly when accessible via the set-top box, and are comparable to traditional linear TV.”

There is also some fear that this is bluster, that account management will be made a chore and this new-look BT TV will be a lick of paint instead of a full makeover. BT promised that “customers can change their package subscriptions simply and fuss-free online or via the My BT app – removing the need to call in to speak with someone,” but that ease of use will have to be seen in the real world after the February 21 launch.

BT Consumer division CEO Marc Allera said that this is informed by a simple belief that “Life doesn’t stand still from month to month, so we don’t believe our customers’ TV should either.”

It certainly is an intriguing premise to reduce churn, one that effectively allows users to take time out from hefty bills as-and-when they need to while still remaining inside BT’s walled garden.

However, there is some cynicism that rather than being a revolutionary model for the future of the industry, this is – to quote Paolo Pescatore, tech, media and telco analyst at PP Foresight – “a last ditch effort to be successful in TV.”

It will be some time before we see the result of BT’s efforts, but in a time where cord cutting seems an inevitability, it is clear that operators must adapt and evolve in order to survive and thrive.