Cord-cutting has begun to hit Europe, with the EMEA region contributing losses of 660,000 pay TV subscribers to an overall global decline of over two million in Q3 2019, according to the latest Multiscreen Index for Informitv. 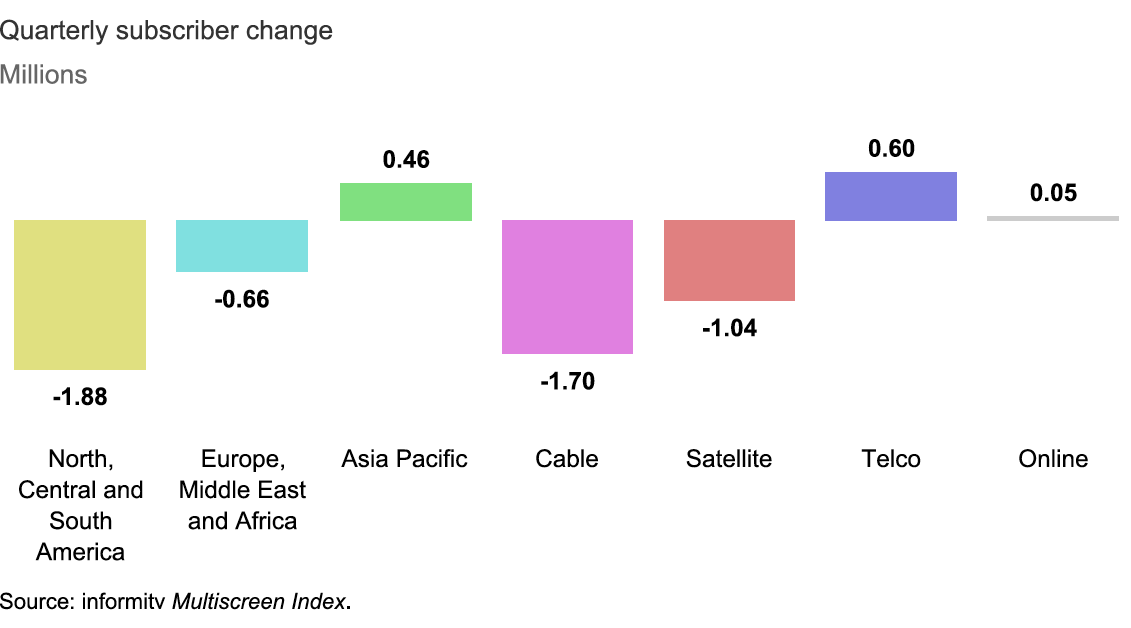 According to the report, pay TV services providers globally lost 2.09 million subscribers in the quarter. While the bulk of losses were from the Americas, which collectively lost 1.88 million subscribers, European operators were also impacted. Sky recorded a net loss of subscribers for the first time, shedding 98,000 pay TV customers across the UK, Ireland, Germany, Austria and Italy, having gained 304,000 in the previous quarter, leaving it with 23.92 million.

According to the Multiscreen Index, AT&T suffered the biggest losses among US pay TV providers, with AT&T Premium TV, including DirecTV and U-Verse, losing 1.16 million customers over the quarter, leaving it with 20.42 million.

Sky-owner Comcast had 44.34 million television customers worldwide, putting it ahead of AT&T with 34.87 million.

Following its acquisition of Liberty Global’s German and central European assets, Vodafone leapt into fifth place globally among pay TV providers after América Móvil and MultiChoice. Vodafone had 18.04 million TV customers in total, including Vodafone Germany’s 13.71 million The German figure includes about 4.7 million basic cable customers that were not previously included in the Multiscreen Index.

Globally, pay TV losses represent 0.46% of the overall subscriber total. Some 41 of the 100 services tracked reported subscriber gains over the quarter.

“Although some operators are losing television subscribers, the Multiscreen Index puts this in context. Despite some subscriber attrition, corporate consolidation is creating some very large players with economies of scale. With substantial recurring revenues they can still afford to lose some customers,” said Multiscreen Index editor William Cooper.