Netflix among top five ‘must keep’ TV brands in US 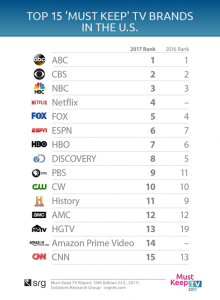 Netflix now ranks among the top five ‘must keep’ TV brands in the US, above Fox, ESPN, HBO and Discover, according to new research.

“This is the first time in the study’s 10-year history that the big four networks failed to occupy the top four spots, with Netflix’s emergence pushing Fox into fifth place,” according to the study.

SRG included the three largest streaming brands in the US – Netflix, Amazon Prime and Hulu – in its tracking for the first time in 2017, and all ranked among the top 25 TV brands.

Netflix was the highest ranking of the three, followed by Amazon Prime at number 14 and Hulu at number 22. However, all three ranked higher among millennial audiences.

Netflix was the number one ‘must keep’ TV brand for 18-34 year-olds, while Hulu placed at number nine and Amazon Prime Video at number 11 among people in this age group.

“More US households now have a streaming service than a DVR, which means that digital-era services will continue to grow in importance, particularly among younger Americans,” according to the report.

SRG’s Must Keep TV Report is a brand tracking survey among a representative sample of US consumers. The 2017 research is based on online interviews with 1,425 American consumers aged 12 and older and was conducted in April 2017.