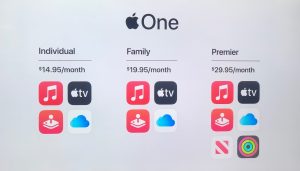 Apple has announced a bundle of its subscription services dubbed Apple One.

The Family plan combines all of the above with a boosted 200GB of cloud storage for US$19.95 per month. This tier allows users subscribers to share their access with members of their family – up to six separate Apple ID users.

Apple also announced a top-tier Premier account for US$29.95 per month which is the family plan, with the addition of subscription news app News+ and the newly-launched exercise membership Fitness+. This membership will only be available in ‘selected markets’, with the 2019-launched News+ still only available in a number of markets including the US, the UK and Australia.

The bundle confirms a previous rumour which was reported earlier this week. International pricing has not been announced, but it is likely that the numbers are the same in GBP and Euros.

Speaking at the web streamed event, Lori Malm, director of services, explained that “Apple One give you and your family all the services you love from one subscription.”

The introduction of Apple One was only a brief section on Apple’s services, with no future plans announced for Apple TV+. There was no mention of any potential plans to extend the one year free trial, as had been reported in late-August.