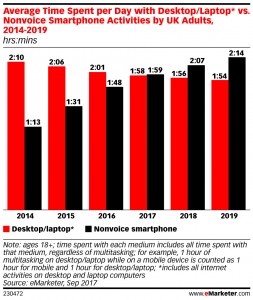 Video viewing will help smartphones to pass computers for the first time this year as the preferred way for UK adults to access the web, according to eMarketer.

The research firm said that adults will spend one hour 59 minutes a day on their smartphone in 2017, compared to one hour 58 minutes for desktop and laptops, with the rise of mobile use attributed largely to digital video viewing.

Videos, particularly on social media platforms, as well as the popularity of messaging apps were defined as “the key drivers behind the mobile uptick” with mobile use expected to rise in the coming years as computer use continues to fall.

Daily time spent on smartphones in the UK will reach 2 hours 14 minutes by 2019, compared to 1 hour 54 minutes for desktops and laptops,according to the research.

Overall, the forecast shows that this year UK adults will spend 2 hours 45 minutes per day with mobile-only devices, including tablets, and will watch an average of 31 minutes per day of digital video on these devices – up 13.5% from 2016.

Adults in the UK are also tipped to spend one hour each day on social networks this year, with 34 minutes of that time spent accessing these platforms via a smartphone.

In terms of overall media consumption, adults in the UK are expected to spend an average of 9 hours 31 minutes per day with “major media” in 2017, up 0.5% from last year.

“Mobile use is increasingly coming to mean smartphone use in the UK, so it’s no surprise to see the time spent forecast tilting ever-more in that direction,” said eMarketer senior analyst Bill Fisher.