Ericsson: viewing is shifting from TV as mobile video soars 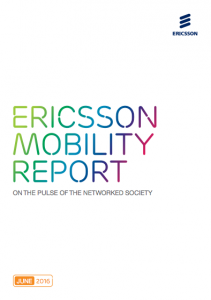 Video will account for roughly 70% of mobile data traffic in 2021 after growing by some 55% annually over the next five years, according to the latest Ericsson Mobility Report.

The study noted a “significant increase” in video traffic share on smartphones and tablets and said that “viewing is gradually switching from traditional TV to streaming video on smartphones”.

In the four-year period 2011-2015, the time teenagers spent watching TV or video on a TV screen dropped by 50%, while viewing on smartphones increased by 85%. Meanwhile, cellular data use for smartphone video grew by 127% in 15 months between 2014-15, according to the report.

While Ericsson said that the change in viewing habits is most clearly seen by teen behaviour, the change in screen preference from the traditional TV set can be “observed across age groups”.

The research said that mobile data traffic grew by around 10% quarter-over-quarter and by 60% year-on-year in the first quarter of 2016 and that mobile video traffic is “increasingly dominant”.

Social networking is forecast to grow by 41% over the coming six years, but its relative share of traffic is expected to decline from 15% in 2015 to around 10% in 2021 due to “the stronger growth in the video category”.

However, Ericsson noted that as a lot of mobile device viewing time is spent indoors, more than 85% of data traffic generated by the use of smartphone video apps goes over WiFi.

The research also predicted that the Internet of Things (IoT) will overtake mobile phones as the largest category of connected device by 2018.

Between 2015 and 2021, the number of IoT connected devices is expected to grow 23% annually. Of the 28 billion total devices that will be connected by 2021, close to 16 billion will be IoT devices, according to Ericsson.

“IoT is now accelerating as device costs fall and innovative applications emerge. From 2020, commercial deployment of 5G networks will provide additional capabilities that are critical for IoT, such as network slicing and the capacity to connect exponentially more devices than is possible today,” said Rima Qureshi, Ericsson’s senior vice-president and chief strategy officer.