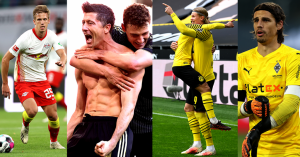 Telefónica’s pay TV service Movistar+ has secured rights to German Bundesliga football through to the 2023-24 season.

The company’s latest sports rights deal follows agreements closed over the last year with UEFA, the NBA, the ACB, the FOM and sports streamer DAZN.

The pay TV operator says its sports portfolio, including the Bundesliga, is enabling it to live up to its claim to be creating ‘the world’s biggest stadium’ for sports fans.

It says that it will offer multiple HD windows for football. #Vamos, its multi-sport channel, will air the best match each day from the German competition, while other live matches will be available on the Movistar Champions League channel, through the main channel or multi-channels of the same name.

On the Bundesliga’s first match weekend, Movistar+ will broadcast the first five marches from the competition on Movistar Champions League, with the match between Borussia Monchengladbach and Bayern Munich also being broadcast on #Vamos.

Telefónica this week ran into trouble with competition and markets regulator the CNMC over the terms of its Formula 1 deal with DAZN.

The watchdog emanded that Telefónica make key changes to the terms of its agreement to meet obligations it undertook at the time of its acquisition of pay TV operator DTS/Sogecable.

Telefónica agreed in January this year to sub-license Formula 1 rights to DAZN and to carry the latter’s dedicated channel covering the sport.