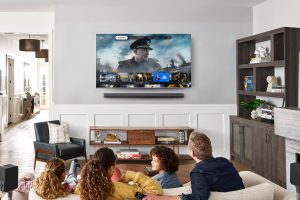 Apple has launched its TV app on Vizio TVs.

US Vizio users will also be given a three month free trial to Apple’s premium TV+ SVOD.

The low-cost TV maker is a best seller in the US and Canada, where the app will initially launch, though Canadian customers will not receive the extended trial.

In addition to watching Apple TV+ originals such as Ted Lasso, Defending Jacob and The Morning Show, users will be able to buy and rent over 100,000 movies and TV shows, including titles available in 4K HDR and with Dolby Atmos.

Customers can also subscribe to Apple Channels through the app, including ViacomCBS’ streamers CBS All Access and Showtime – which Apple recently bundled together at US$9.99 per month for Apple TV+ customers.

The last major feature now available to Vizio customers is the addition of Apple AirPlay 2 and HomeKit capabilities on SmartCast TVs. Airplay 2 allows users to cast content to their TV from their iPhone, iPad or Mac, while HomeKit enables greater integration within a smart home ecosystem.

Of the launch, Mike O’Donnell, chief revenue officer at Vizio said: “With the Apple TV app coming to Vizio SmartCast TVs, customers can enjoy an even broader range of exciting entertainment, including the popular and award-winning Apple TV+ service.

“Knowing the important role the TV has in the home, Vizio continues to expand the entertainment available for consumers to discover. Vizio SmartCast is also the perfect destination for content providers as the platform where millions of customers can access all of their favorite apps, channels and programming from their TV.”

While obviously a boost to Vizio customers, who will join LG and Samsung users in having access to the app via their smart TV, access to Apple TV is still far from ubiquitous. There are still no plans to launch Apple TV on Android TV or mobile devices.

Apple is reportedly considering extending the one year free trial given to Apple device purchasers following a muted debut 12 months, and is also said to be developing a new Apple TV device to replace the aging Apple TV 4K.