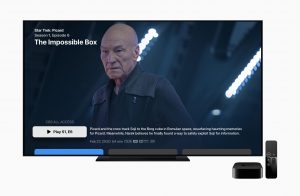 Apple has officially launched its first streaming bundle in a deal with ViacomCBS.

As previously reported, the iPhone maker has partnered with ViacomCBS to offer Apple TV+ customers access to a bundle of CBS All Access’s ad-free tier and Showtime for US$9.99 per month via Apple Channels. The services separately cost a combined total of US$20.98 per month.

Apple said that customers can watch content from all three services online and offline, ad-free and on demand through the Apple TV app using their Apple ID login.

The one major downside for consumers is that they have to watch through the Apple TV app and are thus restricted to viewing on Apple devices, select Samsung and LG smart TVs, and Roku and Amazon Fire TV devices.

The company said that the Apple TV app will launch on Sony and Vizio smart TVs later this summer, but there remains no plans to release the app to Android, Android TV or Windows device owners.

Should viewers be willing to tunnel their viewing to the app however, they will have access to a significant library of ViacomCBS content including originals like Star Trek: Picard and The Twilight Zone, along with other content from BET, Comedy Central, MTV, Nickelodeon, and Paramount Pictures and the live feed of a subscriber’s local CBS station.

Marc DeBevoise, ViacomCBS’s chief digital officer and ViacomCBS Digital’s president and chief executive officer, said: “There’s no better time to launch this special bundle. “CBS All Access has recently expanded to now have 20,000+ episodes and movies for fans to enjoy, plus a great slate of new content from exclusive original series, like Star Trek: Discovery and The Stand, to new programming from CBS like Big Brother, Love Island, and more.”

David Nevins, CBS’s chief creative officer and Showtime Networks’s chairman and chief executive officer said: “Showtime is pleased to be part of a package with CBS All Access offering our broad array of truly addictive series, sports, and documentaries to Apple TV+ subscribers. It’s great to be able to reach so many viewers with an offer that delivers our premium content through the Apple TV app.”

These customers will attract a lower ARPU, but ViacomCBS will likely look at the next few months as a marketing exercise to drum up interest in its ‘super service’ streamer that will launch next year.

CBS All Access and Showtime had a total of 16.2 million subscribers at the end of Q2 and is targeting 18 million by the end of the year.