FA Women’s Super League lands distribution deals in US, Germany and Italy with NBC and DAZN 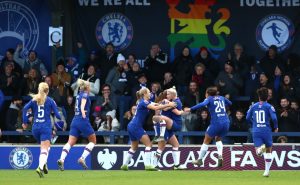 English football’s Women’s Super League (WSL) has announced a number of high-profile distribution deals in the US, Italy and Germany.

The 2019/20 season built off the mainstream success of England’s promising World Cup campaign to attract record audiences, but was truncated due to the coronavirus pandemic.

Now ahead of the new campaign which kicks off this coming weekend, the league has signed deals in the US with NBC Sports and with DAZN in Germany and Italy.

US audiences will have access to a minimum of 50 matches via the NBC Sports Network app and NBCSports.com. NBC will also broadcast at least 12 matches on cable network NBCSN. The press release announcing the deal made no mention of whether any matches will be made available via Peacock.

In the US, the deal will mark the first time that English Women’s Football is broadcast on TV.

DAZN meanwhile will stream 44 fixtures live and on-demand throughout the season in Germany and Italy.

In all three countries, as is the case in the UK, matches not being broadcast live will be available via the FA’s women’s football OTT platform, The FA Player, which launched in August 2019.

In the league’s native UK, BT and the BBC will continue to carry a number of matches, though that number is likely to increase next season with Women’s Sports Group set to broker its upcoming rights deal.

Tom Gracey, the FA’s broadcast and media rights lead, said: “We are delighted to partner with Atalanta Media, NBC Sports and DAZN to showcase the Barclays FA Women’s Super League to viewers across America, Italy and Germany. I must also thank Pitch International for helping to agree this deal. The Barclays FA Women’s Super League continues to grow and with players from all over the world recognising it as a place they want to be, we want fans from those countries to be able to see them throughout the season.

“The popularity of women’s football goes from strength to strength and this is an opportunity for a new audience to witness the skills, excitement and competitiveness that The Barclays FA Women’s Super League has to offer.”

The upcoming season will see league champions Chelsea attempt to defend their crown, following the 2019/20 campaign which was truncated by the coronavirus pandemic.