The linear, over-the-top (OTT) pay TV market in Europe reached 7.4 million subscribers at the end of September 2017, according to research by Dataxis. 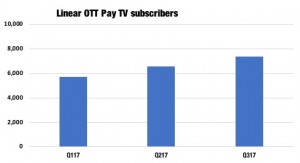 The research firm said that this represents a jump of 13% compared to the previous quarter, with growth in the market driven by an increase in specialised, web-delivered sports and kids services in recent years.

“OTT sports platforms, such as Bein Sport Connect, Eleven Sports or Dazn managed to attract a significant number of sports fans crowd which represents around 25% of the total Linear OTT subscribers as of Q3 2017,” according to the research.

Dataxis revealed that Western European countries are leading the sports OTT space with Germany accounting for a 35% share of this market, followed by France at 25%, the UK at 15%, Spain at 8% and Italy at 5%.

“As sports events are a key driver to TV subscription, it is still to be seen whether this growth will continue at the expense of the traditional pay TV offer,” said Dataxis.

The news comes in the same month that BamTech Media, the Disney-owned streaming media company that powers online services for the likes of Eurosport, ESPN, the NHL and Fox Sports, opened up a major new European headquarters in Amsterdam.

This will house BamTech’s first Europe-based transmissions operations center, which will provide media operations support for the region.