Last week BamTech Media, the Disney-owned streaming media company that powers online services for the likes of Eurosport, ESPN, the NHL and Fox Sports, opened up a major new European headquarters in Amsterdam. Two of its top execs took the time to speak to DTVE, in a busy week of news and developments in the online sports space. 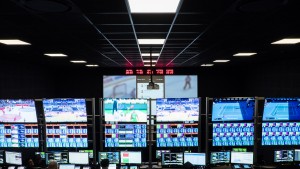 BamTech recently completed work on its first Europe-based transmissions operations center, housed in a purpose-built space in its new Amsterdam North headquarters that will provide media operations support for the region.

While BamTech’s client roster includes the likes of HBO and Hulu, the company’s roots lie in sports. Initially founded in 2000, BamTech grew out of Major League Baseball’s interactive media and Internet company, MLB Advanced Media, and specialises in broadcasting live events at scale over the web.

Asked about the company’s European today plans, Bill Martens, BamTech’s general manager of Europe, said “first and foremost we’re very focused on the Olympics”. BamTech first partnered with Discovery Communications in 2016 to launch BamTech Europe, and the company’s technology underpins Eurosport Player, which is now available in some 52 countries and in 20 languages. Next month’s Pyeongchang winter games will broadcast on the service, which BamTech continues to develop from a product perspective.

Martens said that BamTech was first attracted to the European market because it saw a “tremendous business opportunity” to both grow its portfolio here and also to up the service it offers to existing clients. “Many of the sports and media companies in Europe are reacting to similar trends that we’re seeing in the US market in terms of the decline in TV audiences and changing consumer behaviours,” said Martens. “Additionally we wanted to support some of our clients on a more global basis. We support services today that are available in more than 200 countries globally.”

For its new headquarters, BamTech choose Amsterdam over other short-listed locations like Dublin, Frankfurt and Luxembourg, in part because it serves as an easy hub for the rest of Europe. “The check-list for the requirements included great infrastructure and good connectivity,” said Martens. “It was also important that we have access to a strong talent pool from an engineering perspective and that it was a multi-lingual workforce, given that we planned to support clients in many countries, in content in many different languages.”

Roger Williams, BamTech’s senior vice president of media operations, who was in Europe for the opening of the new headquarters, said that the company now has client app development, media operations, technical infrastructure and client services, all currently operating within the Amsterdam location. “Currently we’re at about 50 employees and we have expansion plans in 2018. We don’t have a specific number to share but we’re definitely expanding on that number.”

From a US perspective BamTech is working to develop ESPN+, the new multi-sport video streaming service that is due to go live this year, though BamTech would not confirm a precise launch date. The service was announced by ESPN parent company Disney last year as part of a strategic move that saw it pay US$1.58 billion (€1.34 billion) to up its stake in BamTech to 75%.

The week in sport

Elsewhere this week it emerged that Facebook has appointed Eurosport CEO Peter Hutton as it looks to secure live sports rights, in a move that serves as a further reminder of how live sports and online streaming are increasingly going hand-in-hand. The hire underlines Facebook’s ongoing aspirations in this space, following previous activity like its ultimately unsuccessful bid last year for global Indian cricket rights.

It also follows major changes to how Facebook is choosing to surface and prioritise content on its site. Earlier this month Facebook said it is altering its news feed to focus more on “personal connections” in a move that will de-prioritise posts from businesses, brands and media. While Facebook’s decision has naturally struck alarm bells among publishers, it does not appear to be at odds with its current content strategy.

Facebook launched its Watch video platform in the US last year with the aim for it to be home to a range of shows – including reality, comedy and live sports. Speaking last year, Zuckerberg explicitly said that Facebook’s video ambitions are focused on sparking meaningful social interactions around content. The Facebook boss said that when “done well” video brings people closer together, claiming that TV shows and sports can create a “greater sense of belonging than many other kinds of communities”. Live sports could well be a sweet-spot for Facebook, which this month said that live videos average six times as many interactions as regular videos on the social network.

All this makes for an interesting few months with Premier League football rights coming up for auction for the three seasons 2019/20–2021/22. Significantly, live packages this time around will be offered on a “technology-neutral basis”, meaning the Premier League is opening itself up to the possibility of matches being broadcast only online.

Speculation is rife about who will table offers for the live rights to a total of 200 matches per season, that will be split into seven packages. According to an Ampere Analysis research note released this week, the value of Premier League football rights is set to break the £10 billion barrier for the first time, with Amazon emerging as a “significant potential bidder”.

Ampere said its “most likely scenario” is that Sky takes four or five of the seven rights packages that are up for grabs, BT takes an additional two or three, while a third bidder – potentially Amazon or Liberty Global – takes one or two packages. While Amazon’s involvement as a bidder could be a key factor in inflating international rights this time around, Ampere predicted that if it were to bid for UK rights would be limited to one of the smaller packages to “test the water this time around”. Liberty, which owns Virgin Media in the UK, was cited as a possible new bidder having shown an increasing appetite for direct control of content in recent years, including Formula One rights.