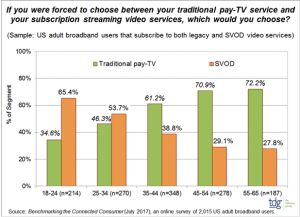 Almost two thirds of US broadband users aged 18-24 would choose SVOD over traditional pay TV if they were forced to pick one, according to new research.

“There is no doubt that SVOD has taken and is taking a growing part of mainstream mindshare, especially among younger viewers,” said TDG president, Michael Greeson.

“The question now is whether pure-play broadband pay TV providers – those without legacy assets, like Hulu TV – can capitalize on the opportunity.”

TDG’s research was based on a survey of more than 2,000 US adult broadband users conducted in Q2 2017.