eMarketer: US virtual reality use to climb 110% this year 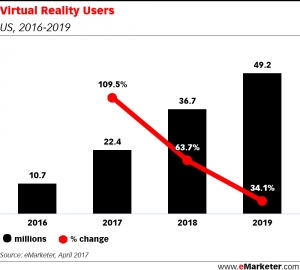 Virtual reality usage will grow by 110% in the US this year, but will not reach mass adoption “in the foreseeable future”, according to eMarketer.

The research firm’s first forecast on virtual and augmented reality estimates that 22.4 million people in the US will engage with a form of VR monthly in 2017, up 109.5% compared on last year.

eMarketer said the category is “being driven mainly by 360-degree photos and videos on Facebook and YouTube”, however in its definition of VR it also includes games via headsets and 360-degree videos, photos, and product demos viewed via any device.

“The gaming industry is driving the growth of virtual reality headset usage. This year, 9.6 million people in the US will use a headset to experience VR monthly. That’s a jump of 98.7% over last year,” according to the research.

“While headsets provide a more immersive experience, engagement will remain low due to the often high cost of VR headsets. This year, just 2.9% of the population will use one monthly, with that number growing only slightly to 5.2% by 2019.”

The US study also predicts that this year 40.0 million Americans – some 12.3% of the population – will engage with some form of augmented reality monthly, up 30.2% over last year.

eMarketer said that much of the growth of AR is being fueled by Snapchat Lenses, Facebook Stories, and Instagram Stories.