Ampere: consumers spend more than ever on TV services 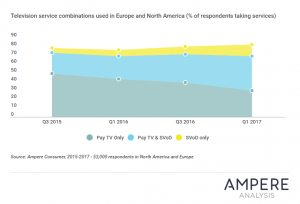 The average consumer is spending “more than ever before” on TV services by combining pay TV, VOD and SVOD, according to Ampere Analysis.

The Europe and North America study claims that viewers are building their own TV bundles from all the options available, rather than deserting their pay TV operators through cord cutting.

In Western Europe the average consumer spent US$95 per year on subscription television after sales tax, up from US$78 five years ago, according to the research.

“The often-predicted mass cord-cutting from pay TV, driven by the growth of SVOD, has yet to arrive. But let’s not get complacent. There are warning signs,” said Ampere Analysis research director, Richard Broughton.

“Our research has found that consumers who are doubling-up on their TV services, combining their pay TV service with one or more SVOD services, are twice as likely to be strongly considering leaving their main TV provider in the next six months.”

Broughton said that pay TV operators must offer the same ‘watch everywhere’ features of SVOD providers and continue to invest in exclusive content to “avoid being left behind by more flexible competitors.”

Ampere said that consumers are “doubling up” their TV services because SVOD exclusivity means that their catalogues rarely overlap, claiming that in the UK and Germany 94% of titles are exclusive to a single SVOD service.

It also said that Netflix and Amazon have been the “catalysts”, accounting for more than half of SVOD contracts across the markets surveyed by Ampere Analysis.

“We estimate that subscription TV services have generated US$18bn of entirely new revenue over the last two years across the globe. Almost half (45%) of this new revenue was driven by SVOD services, the remainder by traditional cable and satellite companies,” said Broughton.

“While a degree of cannibalisation of subscription TV services is undoubtedly occurring as some consumers decide to cut the pay TV cord, the general trend is for more, not less, access to television services.”

The proportion of homes taking just pay TV, or pay TV in combination with an SVOD service, has remained roughly stable at approximately 70% of respondents.

However, the number of homes with on-demand services as their sole subscription television platform has increased from 5% of internet users in 2015 to 13% at the beginning of 2017. The proportion of consumers taking pay TV alone declined from 49% of internet users to just 30% over the same time frame.

Households with access to subscription on-demand in Europe and North America now typically take between two and three SVOD services each, according to the research.

The findings are based on a survey of 53,000 internet users from across Europe and North America over the past 18 months.