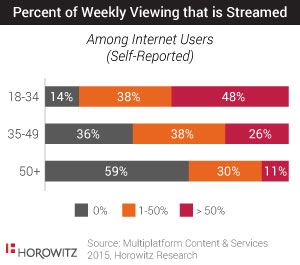 Over-the-top (OTT) video services like Netflix remain “a complement to, not a replacement for” traditional pay TV, with 40% of web users taking multichannel and an SVOD service, according to Horowitz Research.

The firm’s Multiplatform Content and Services report claims that 42% of web users only take a multichannel service, compared to 11% who only take an SVOD service. Some 7% were found to have neither.

The US study said that 78% of OTT users are also multichannel subscribers, but claimed that recent OTT developments from traditional pay TV distributors, like DISH’s Sling TV and DirecTV’s Yaveo, could “start changing the game.”

“For many, streaming video has become an integral part of the viewing lifestyle. The idea of an internet TV service, at a lower price point and with more customisable options, is an attractive prospect,” said Adriana Waterston, Horowitz’s senior vice-president of insights and strategy.

“No longer tied to their physical infrastructure, OTT offerings have the potential to offer huge opportunity for distributors to reach beyond their footprint, shaking up the entire pay TV model.”

Horowitz’s report found that among web users overall, 51% have access to an OTT SVOD service like Netflix, Hulu Plus or Amazon Prime Instant Video. Among millennials, this figure rises to 75%, with 48% of people in this age bracket claiming to spend more than half of their viewing time streaming content.

“For millennials, streaming is as natural as turning on the TV set, so an OTT service direct from a distributor could be a natural fit,” said Waterston.

People aged under-35 were three times as likely to have an OTT SVOD service and no multichannel service at 21%, compared to just 7% among those aged 35 and above, according to the research.