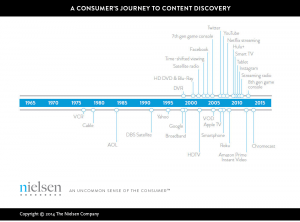 The number of broadband-only households in the US has climbed by 112% year-on-year, with the average adult also watching less live TV than a year ago, according to Nielsen.

The research firm’s Total Audience Report for the third quarter of 2014 claims that more choices are being driven by technology and that 3% of US homes are now broadband-only – up by more than 100% compared to last year.

According to the study, which aims to deliver “comprehensive measurement of all audience and all advertising,” 46% of US homes have a games console, 40% use subscription video-on-demand service, 13% have an enabled smart TV, while 13% have a multimedia device.

At the same time smartphone and tablet penetration were both up year-on-year, now standing at 75% and 46% respectively.

“While we are not seeing a departure from media content consumption, we do see a shift in consumer behaviour and today we see a resounding growth in consumption on digital platforms,” said Nielsen senior vice-president of insights, Dounia Turrill.

“The growing penetration of new devices and the popularity of subscription-based streaming services, time-shifted and over-the-top viewing — as well as cord-cutting and cord shaving — are fundamentally changing the TV industry.”