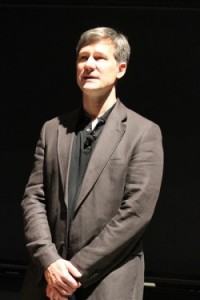 TV has “not innovated” in the past decade and programmers are losing control over their audience, according to digital media strategist Robert Tercek.

Speaking at Arris’ Video Leadership Forum in Barcelona this week, Tercek, who has previously worked for companies like MTV, Star TV in Asia, Sony Pictures Entertainment and the Oprah Winfrey Network, called for TV companies to engage more with their audiences.

He also predicted that, in the future, TV experiences will become far more personal, largely moving from programmed schedules to allowing individuals to create their own on-demand playlists.

“TV has basically not innovated in the past decade. If you think about the big innovations in television, video-on-demand, the DVR, the ability to time-shift and record shows, and high definition broadcasting – those three innovations are all more than 10 years old,” said Tercek.

“3D TV is the last big technology introduction and it was a disaster – it didn’t work at all. So it’s worth paying attention to what’s happening outside of the TV ecosystem.”

He said that in an age of social media and services like Facebook, Instagram and Snapchat, millennials not only expect to be able to participate in media, but also see video as “something disposable” – a radical shift from earlier generations.

“My advice for TV companies is make room for the three billion that are already active with social media and give them roles,” said Tercek.