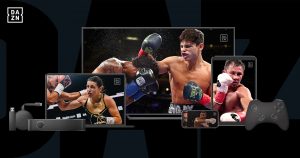 With services starting at the equivalent of £1.99 or less, sports fans can sign up to the service and watch a range of live world championship boxing and on-demand original programming.

As well as its fight schedule, DAZN’s global platform features an archive of classic fights, athlete features and a slate of original programming including 40 Days, Saturday Fight Live and One Night. DAZN said it was committed to adding more sports and sports content to the global service from 2021.

DAZN announced the planned expansion of its presence to over 200 markets in March, but the launch was subsequently delayed due to the impact of the COVID-19 pandemic.

The DAZN app will be available globally on most internet-connected devices, including smartphones, tablets, laptops, PCs, and living room devices such as smart TVs, streaming sticks and game consoles.

Thie move marked a dramatic expansion of the service, which previously operated a mix of sports service in nine countries.