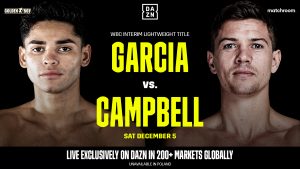 Sports streamer DAZN will launch the delayed expansion of its presence to over 200 countries and territories with its combat sports offering from December 1. The platform will debut with back-to-back weekends featuring boxing events with international appeal, DAZN said.

DAZN announced the planned expansion of its presence to over 200 markets in March, but the launch was subsequently delayed due to the impact of the COVID-19 pandemic.

The sports streamer said that initial monthly price point for new markets will be the equivalent of £1.99 or less.

At launch, DAZN’s global platform will feature world championship boxing events, as well as an archive of classic fights, athlete features and a slate of original programming including 40 Days, Saturday Fight Live and One Night. Additional sports and programming will be added beginning in 2021, the streamer said.

The DAZN app will be available globally on most internet-connected devices, including smartphones, tablets, laptops, PCs, and living room devices such as smart TVs, streaming sticks and game consoles.

“From the UK to Mexico to Australia, we’ve seen an encouraging level of interest in our key events since first launching in 2016,” said DAZN EVP Joseph Markowski. “We’re looking forward to introducing the DAZN platform around the world this December with an exciting schedule of fights.”