Amazon sees majority of UK sign-ups in Q3, but Netflix continues to dominate 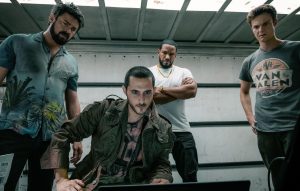 According to Kantar’s Entertainment On Demand report, Amazon Prime attracted 51% of all UK SVOD sign-ups in the three months to September. By contrast, in this time Disney+ attracted 15.4% of all sign-ups, Netflix 12.3% and Now TV only 3.9%.

This follows on from a dominant Q2 in which Amazon attracted 45.1% of all sign-ups to Disney’s 21.8% and Netflix’s 11.7%. Disney commanded the highest quarterly share of any streamer in Q1, due to the highly-marketed launch in March.

Amazon’s rise is in part due to the fact that the past six months have been dominated by the UK’s coronavirus-related lockdown, and Amazon Prime provides both entertainment via Prime Video and expedited shipping on Amazon’s ecommerce platform.

The latter was perhaps a greater factor for customers than Amazon’s video offering, with Kantar also noting that Netflix dominated in terms of viewing. Q3’s four most popular titles – The Fall, Lucifer, Umbrella Academy and Ozark – were all either Netflix originals or exclusively available on the streamer. The only non-Netflix title in the top five is Amazon’s The Boys, which started its highly-publicised second season in August.

The research also found that 12% of all new subscriptions in Q3 were switched, with users cancelling one SVOD service to make way for another.

Perhaps unsurprisingly, Disney+ saw a reduction in engagement during the quarter, with children returning to school. The number of users classed as low intensity rose from 40% in Q1 to 61% in Q3, with churn at 7.8% – more than double Netflix’s rate of 3%. One in five (22.5%) cited The Mandalorian as their primary reason for subscribing, while 2.4% said that they signed-up for Disney+ in order to watch the £19.99 premium movie Mulan.

Bundles also continue to be a popular means of accessing streaming, making up 16.8% of all new SVOD subscriptions in Q3. The bundle of Netflix and Sky is the most popular, followed by O2 and Disney+, and the combo of BT TV and Now TV.

The final note from the research is on Apple TV+, with its share of new SVOD subscribers remaining “fairly flat” at 2.7%. Kantar says that while consumers are positive about the TV interface, a lack of content is proving to be an issue with 52% saying that they are not prepared to continue paying at the end of their trials – higher than industry standard. This research seems to prove that Apple is right to extend its free trial of the service through to February 2021.

Dominic Sunnebo, senior vice president at Kantar, Worldpanel Division, said: “Q3 saw a further drop in the number of GB households taking out a new SVoD subscription in the to just 3.0%, or a little over one million, indicating consumers are tightening their belts as the economy comes under sustained pressure.