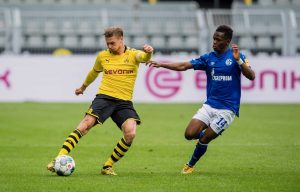 The German Bundesliga has seen a significant decrease to its international TV rights contracts.

According to local publication Sponsors, the Deutsche Fußball Liga (DFL) saw the total value of its international broadcast deals drop by €50 million – a decrease of 20% from the €250 million generated for the 2019/20 season.

This comes in spite of the fact that the Bundesliga had moved away from its 80-territory arrangement with Fox and signed a number of high-profile distribution partnerships with the likes of Disney-owned ESPN+ in the US and a renewed deal with Nordic Entertainment Group which covers the entire Nordic region.

The 20% loss in revenue reflects the current economic crisis which has impacted sports rights across the board. The Bundesliga itself saw its domestic rights sell for less – €4.4 billion, down from the previous deal worth €4.64 billion – but managed to remain relatively stable.

Bundesliga International CEO Robert Klein told the paper that  MENA territories created significant difficulties, with beIN Sports telling the organisation that it would not renew its deal in the region.

For its part, the Qatar-based pay TV operator has long maintained that sports rights holders had become overly reliant on unsustainable rights valuation growth. Speaking last October, beIN Media Group CEO Yousef Al-Obaidly said that the “media rights bubble is about to burst for sports”, with the industry “sleep-walking towards a financial cliff”. The CEO was referring to the sophistication of modern content piracy and would not have envisioned a global pandemic wiping out value, but the comments are seemingly coming true.