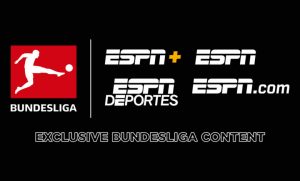 Disney-owned ESPN has confirmed that its streaming service ESPN+ will broadcast more than 300 matches from the upcoming Bundesliga season when it kicks off next month.

ESPN initially signed a deal with the German football league last year, and has just announced additional details of its coverage across its streamer and linear channels.

The US$5.99 per month ESPN+ will be the primary home of the league, with over 300 live matches, while the company’s linear television platforms – ESPN, ESPN Deportes and ESPN2 – will also feature select matches during the season.

In addition, ESPN has said that it will look to raise the profile of the competition with the production of magazine programming, additional interviews and behind the scenes footage, and an archive of 50 classic matches to watch on demand via the streamer.

The company claimed that the addition of the Bundesliga will make ESPN+ “home to the most comprehensive collection of live soccer available on one platform in the United States”. Its portfolio also includes Serie A, the Eredivisie, the English FA Cup and Spain’s Copa Del Rey in addition to others.

Since launching in 2018, ESPN+ has reached 8.5 million subscribers. This figure has been buoyed by the launch of Disney’s US$12.99 streaming bundle which also includes Disney+ and Hulu.

The service will also see a new flock of users thanks to a renewed distribution deal with Verizon that will give Play More Unlimited and Get More Unlimited customers (US$45 and US$55 per month respectively) access to the triumvirate of SVODs for the duration of their contracts.