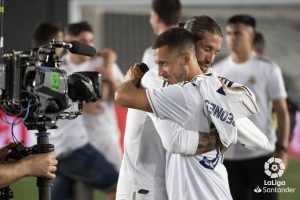 Premier Sports’ dedicated Spanish football channel La LIga TV will be free for Sky customers in the UK through to the beginning of October.

The channel, which launched in the UK in January, will be available to view by new and returning subscribers for free until October 1.

Sky subscribers can activate the network on channel 435 by visiting the Premier sports website and entering their details. They will then have full access to La Liga TV HD and streaming access via the Premier Player app.

After October 1, viewers will automatically be charged £5.99 on a rolling monthly basis.

The offer is also available to non-Sky subscribers by signing up online and streaming the channel via the app, and the channel is available on Virgin TV via a £9.99 per month bundle with Premier Sports 1 and 2.

Premier Sports has not yet revealed subscriber numbers, but this promotion should help La Liga to become, as La Liga president Javier Tebas said at the channel’s launch event, “the most watched sport in the UK after the Premier League.”

La Liga is set for an intriguing season following European embarrassments for typical stalwarts Real Madrid and Barcelona – the latter of which is undergoing a tumultuous shakeup spearheaded by a desire of star player Lionel Messi to leave the club – while Sevilla, hot off its victorious Europa League campaign, will look to push the top clubs for the title.