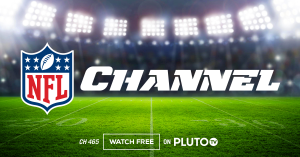 ViacomCBS’s AVOD Pluto TV has announced a new multi-year deal with the NFL to expand the American Football league’s content on the streamer.

The parties initially signed a deal last August which saw the launch of The NFL Channel which broadcast a curated feed of library content with highlights and full replays of classic games and archival episodes of HBO series Hard Knocks.

Now 11 months later, the league has agreed an expanded deal which will see the addition of multiple new series which are dedicated to the recent 100th anniversary season.

The channel will also continue to show highlights, match previews and press conferences, and other archival content.

Jeff Shultz, chief business officer at Pluto TV, said: “For the many avid football fans that are part of Pluto TV’s audience, having yearlong access to NFL content beyond the regular season is priceless,” said Jeff Shultz, Pluto TV’s chief business officer. With an incredible line-up of award-winning programming, alongside some of the most memorable highlights, replays and matchups of the past decade, we are excited to be able to offer this evergreen content to our viewers, no matter the season.”

Jesse Wallace, NFL’s vice president of affiliate sales and distribution, said: “We are thrilled to continue our partnership with Pluto TV that provides fans with more exciting NFL content including our critically-acclaimed programming celebrating the NFL 100 season last year. NFL fans enjoy having access to our classic games and programming year-round, and we’re proud to give Pluto viewers access to more exciting content from their favorite teams and players.”