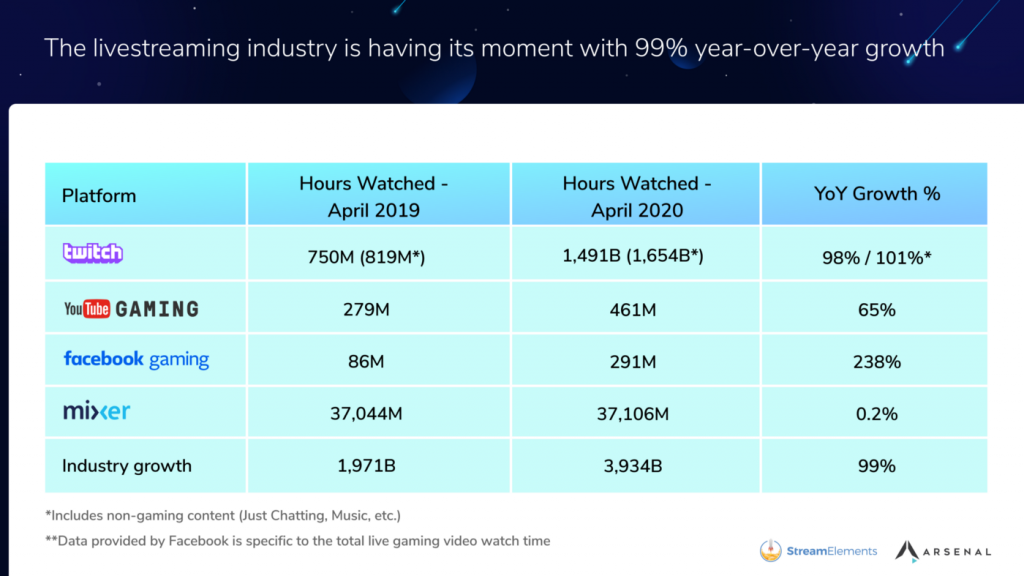 The live streaming industry is thriving amid the global lockdown, with the sector growing a full 45% between March and April.

According to the latest State of the Stream report from Stream Elements and Arsenal.gg, “the pandemic-driven shelter-in-place mandates have supersized the industry.” The overall sector grew by 99% year-over-year in terms of hours watched, growing from 1.971 billion in April 2019 to 3.934 billion in April 2020.

Despite the highly publicised growth of its rivals, Amazon-owned Twitch is still the clear market leader. In April alone, the platform saw viewers watch 1.65 billion hours of content – 1.49 billion of which was gaming specific. This is an overall year-over-year growth of 101% in terms of hours watched.

Facebook Gaming has also impressed in terms of its growth, with a year-over-year increase of 238% to a total of 291 million hours watched in April 2020.

Despite big spending in signing a number of high profile personalities to exclusive deals, Microsoft’s Mixer investment is yet to pay off with it still a distant outsider. The platform saw an April 2020 total of 37.106 million hours streamed, a measly 0.2% growth from the April 2019 total of 37.044 million hours watched.

Of the Microsoft platform’s shortcomings, Louise Shorthouse, research analyst at Omdia, said: Mixer has really failed to gain traction, despite paying out to sign up big names like Ninja. A number of factors feed into this. Twitch is a long-established games streaming platform, whilst Facebook and YouTube have huge existing social media audiences they can leverage. The lack of growth for Mixer during this unprecedented time, when the games industry more broadly is seeing substantial boosts in user engagement, suggests that the platform is still lacking in visibility. There is no native app for Mixer built into PS4, but there is one for Twitch. Also, some countries and communities are under-represented on Mixer due to the platform’s limited availability and audience.

“Mixer has also failed to address a market niche. Twitch tends to appeal to the PC gaming/esports audience, whereas YouTube has built a strong community of mobile gamers. Although these are largely organic developments, it seems like Mixer lacks a distinct identity and direction and that is something that could drive consumer interest.

“Despite the fact that Ninja and others have failed to inject life into Mixer viewership, YouTube and Twitch still clearly see value in exclusivity. Twitch has since partnered with controversial streamer Dr Disrespect, and YouTube has made a deal with Pewdiepie.”

The report also notes that from March to April, every major live streaming platform experienced growth with 45% more hours being collectively watched. Stay-at-home orders around the world have given the sector a boost, with Facebook seeing the most significant gains of 72% between March and April.