Ovum: FAANG will continue to dominate streaming despite new launches

Facebook, Apple, Amazon, Netflix and Google – the group of tech giants collectively known as FAANG – will continue to dominate the streaming video world despite the launch of multiple new services by US studios, according to an analysis by research outfit Ovum. 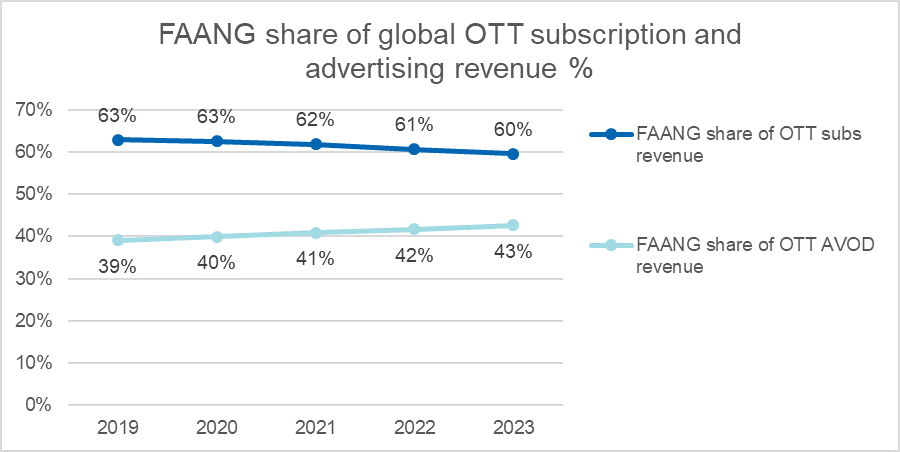 According to Ovum’s World Information Series-Service provider service, the FAANG five are set to account for 63% of global OTT subscription revenue this year, with this figure predicted to largely hold steady through 2023, when these companies will represent 60% of the market.

Ovum also predicts that the FAANG group’s hold on advertising-based video on demand will actually intensify. FAANG video services, predominantly Google’s YouTube and Facebook Video, will account for 43% of the AVOD market in 2023, up from 39% in 2019, according to the research outfit.

The raft of big new OTT video services heading into 2020, including those from Disney, Warner Bros., NBC, ITV and Discovery, will create unprecedented competition with huge investments in OTT video technology, original and exclusive content and subscriber acquisition promotions over the next five years, according to Ovum. These promotions include Verizon’s offer of 12 months of free Disney+ to around 50 million US mobile subscribers.

The research outfit predicts that the greater competition in streaming is likely to accelerate declines in traditional pay TV while making life extremely difficult for smaller video platforms that either cannot or will not sustain multi-year losses in order to survive. Ovum cites the example of PlayStation’s Vue’s forthcoming closure in January 2020 after failing to find a buyer, and failing to top one million subscribers in its four-year lifespan, along with Walmart’s reported move to seek buyers for its transactional video service, Vudu.

“FAANGs include the most innovative, disruptive and largest companies ever to compete in entertainment distribution. These companies have built dominant positions in the key growth segments of video distribution: OTT subscriptions and advertising. This situation is making life very hard for competing video services seeking to gain a foothold,” said Ed Barton, chief analyst of Ovum’s consumer and entertainment team.

“The FAANGs are feasting while entertainment giants prepare to lose billions of dollars establishing direct-to-consumer video platforms.The entire OTT video industry is likely to be loss-making until the mid-2020s. The companies left standing in 2025 will have the opportunity to fashion the long-term future of visual entertainment distribution, but they will have paid a very high price.”