Latin America is expected to add around five million pay TV subscribers between 2018 and 2024, bringing the total to 77 million, according to Digital TV Research. 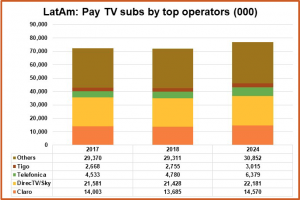 The report estimates that pay TV penetration in the region will not climb beyond the current 44% of TV households and that revenues will fall by 2.1%, some US$381 million, over the forecast period to US$17.82 billion.

Amercia Movil and DirecTV/Sky accounted for nearly half of Latin America’s pay TV subscribers by the end of 2018. DirecTV/Sky had 21.43 million subscribers, a figure that is tipped to grow modestly to 22.18 million by 2024.