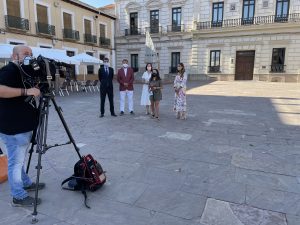 Telefónica has staked a claim to be the leader in the use of 5G technology for TV production and distribution in Spain by unveiling details about a number of projects it is working on.

The telco successfully completed its first live 5G transmission in February, when it covered the basketball Copa del Rey at the Wizink Center in Madrid.

Telefónica’s TV service Movistar+ also produced a live interview with Candela Peña during the Ver-Mú, while regional service Televisión de Galicia (CRTVG) became the first public broadcaster to transmit live in 5G in July with coverage of the Telexornal del Mediodía from Santiago de Compostela, with transmission provided by Telefónica.

More recently, the telco has teamed up with Castilla-La Mancha Media for the first live transmission in 5G using the 700MHz from Alcázar de San Juan for the latter’s morning news show.

In all the use cases, Telefónica’s contribution to 5G transmissions includes connecting a 5G camera to backpack capable of coding the video, equipped with 5G models to enable high-quality, low latency remote broadcasts. The telco has also trialled the use of drones for coverage of sporting events using the same technology based on 5G.

Telefónica has partnered with technology outfits Aviewet and Mobile Viewpoint for 5G transmission.

“5G implies a revolutionary change in live retransmission of media, making it more efficient and flexible. With these projects we have demonstrated that media is one of the first sectors that can benefit from the capabilities of 5GH and of the wide network coverage that Telefónica has already rolled out. Furthermore, the combination of Telefónica’s extensive fibre network with the potential of 5G is going to supercharge the digitisation of the audiovisual sector and other sectors like industry and connected cars,” said Mercedes Fernández, head of innovation at Telefónica España.