Ampere: Netflix leads the FAANGs with focus on comedy and sci-fi originals 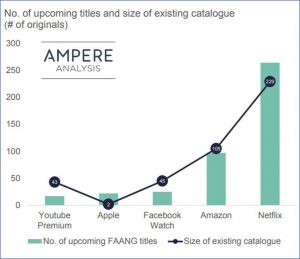 This is according to new research by Ampere Analysis, which shines a light on both the number of originals that the FAANGs are working on and the genre skews that make up these multi-billion-dollar investment efforts.

Netflix is leading on the commissioning front with more than 250 upcoming titles – a figure that will more than double its originals catalogue, according to Ampere.

Netflix has been maintaining its focus on comedy and sci-fi commissions – youth-skewing genres that have performed well for the company via shows like Stranger Things, Master of None and BoJack Horseman.

Amazon was found to be committing a higher proportion of new commissions to drama titles at 29% of upcoming titles compared to Netflix’s 17%. Apple meanwhile is emulating Amazon and Netflix with sci-fi its top genre for commissions, as seen by shows like its forthcoming reboot of Stephen Spielberg’s Amazing Stories.

Across all the FAANGs, comedy was found to be the most-commissioned genre overall.

“With so much new content being produced across a range of subscription services, the FAANG group are under increasing pressure to create content that not only attracts new audiences but also prevents existing consumers from churning,” said Ampere analyst Richard Cooper.

“All the major players have been expanding the number of original commissions in the face of an increasingly competitive market. Netflix is set to more than double its originals catalogue, as is Apple.

“What’s interesting is the different audience profile that each of the FAANGs appear to be targeting with their originals content, suggesting they’re aiming at different niches within the SVOD market.”