Survey: Millennials and Generation X driving accelerating cord-cutting in US

The Millennial and Generation X cohorts are driving cord-cutting in the US, with pricing, being forced to pay for channels they don’t watch, multiple fees and hidden charges and discounting for new customers being the prime reasons for dropping pay TV, according to a study by CG42. 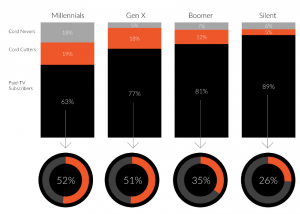 Some 63% of Millennials currently subscribe to paid TV services, with 19% already being cord-cutters and 18% being cord-nevers.

Among Generation X, 77% subscribe to paid TV servies, with 18% having cut the cord and 5% being cord-nevers.

Only 35% of baby boomers – those born between the late 1940s and mid-1960s – are thinking of cutting the cord, according to CG42, with 81% of this generation currently subscribing to paid TV services.

Among older viewers – the so-called ‘silent generation’ born between the mid-1920s and mid-1940s – only 26% are thinking of cutting the cord. Some 89% of this cohort currently subscribes to paid TV services.

The study’s numbers suggest that some five million US consumers could cut the cord this year, representing a huge increase over the last two years.

CG42 surveyed 3,385 US consumers online, including 1,030 cord cutters, 599 cord-nevers and 1,756 paid TV subscribers. However, cord-cutting would have to accelerate considerably from last year’s numbers.