Customer satisfaction with streaming video services such as Netflix in the US far exceeds that for traditional pay TV services, according to the American Customer Satisfaction Index (ACSI), an annual survey of consumer attitudes to services including pay TV, video streaming, ISPs and fixed and wireless phone.

Customer satisfaction with pay TV services fell 3.1% year-on-year on average to land on an ACSI score of 62 out of 100, while streaming video services, included in the survey for the first time, achieved a score of 75.

According to the ACSI, OTT SVOD services such as Netflix and Amazon have had a far-reaching impact on viewer expectations, raising the bar by providing greater personalisation, lower prices, more mobility and better customer service.

As a result, subscription television and internet service providers rank last among all industries tracked by the ACSI. Across the pay TV category, all but two of the largest providers registered lower customer satisfaction in 2018 and none improved over the past year. 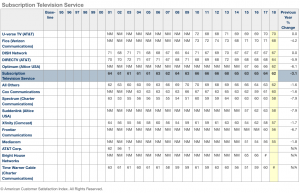 By contrast, Netflix achieved a satisfaction score of 78, equal top of the list among streaming service providers with Sony PlayStation Vue and eSports service Twitch. 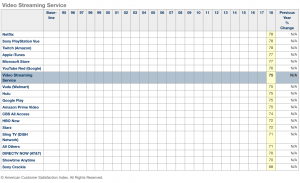 Apple iTunes and Microsoft Store made up the remainder of the top five with 77 points each. Among other major SVOD players, YouTube Red scored 76, Hulu scored 75, Amazon Prime Video scored 75 and CBS All Access scored 74. HBO Now came slightly lower in the list with 72.

Pay TV operators did better with their video-on-demand offerings than with their overall pay TV services. VOD as a category achieved an average satisfaction rating of 68, headed by AT&T’s U-Verse with 74, DISH Network with 73 and Verizon’s Fios with 72.

Among the different aspects of pay TV service offerings that can impact on customer satisfaction, HD picture quality topped the list with a score of 80 out of 100, unchanged year-on-year. Among factors that have seen a deterioration in perception year-on-year are the courtesy and helpfulness of store or service centre staff, down one point to 78, the range of premium and standard channels available, down one point to 73, and call centre satisfaction, down two points to 63.

A separate survey of satisfaction of customers of the top five streaming services by User Testing meanwhile game Netflix top marks with a score of 89.5 out of 100, followed by Hulu with 86.8 and Amazon Prime with 85.

YouTube came fourth among the five services studied with 80.7 while HBO Now trailed at the rear with a score of 71.8. HBO Now customers reported difficulty in finding any recommended content, and also experienced time-lag, freezing and buffering issues.

The User Testing survey of 500 SVOD users found that only 29% of customers actually watched content that was recommended to them. Over half of respondents also reported that the subscribe to two SVOD apps to find all the content they want, with 90% of HBO Now customers also subscribing to Netflix and 80% to Amazon Prime.

The User Testing survey also found that smart TVs and streaming devices such as Roku, Apple TV and the Amazon Fire TV Stick accounted for 45% of participants’ preferred watching device, with only 11% citing their smartphone as the preferred device, and 37% preferring computers.