Pay TV operator Sky has overtaken Procter & Gamble as the biggest spender on traditional advertising in the UK in 2017, according to data released by audience ratings agency Nielsen. 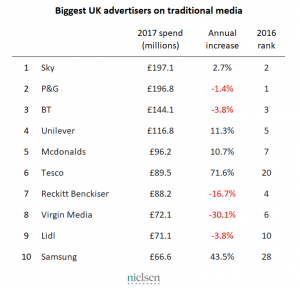 BT, the third-placed advertising buyer, reduced its expenditure by 3.8% to £144.1 million, but retained its place on the list.

The other media and telecoms player on the Nielsen top 10 advertisers, Virgin Media, dropped from sixth to eighth position after cutting its advertising spend by 30.1% to £71.1 million. Virgin Media recorded the second biggest reduction in advertising spend among the UK top 100 buyers after discount supermarket chain Aldi.

New entrants in the top 10 advertisers included consumer electronics manufacturer Samsung, which jumped from 28th position to take the number 10 spot after increasing its advertising spend by 43.5% to £66.6 million.

“It was quite a chalk and cheese year in terms of how the very biggest advertisers changed their emphasis on traditional advertising,” says Barney Farmer Nielsen’s UK commercial director.

“Half spent more, half spent less, with the likes of Tesco and Samsung ramping up spend dramatically, in complete contrast to that of Virgin and Aldi. Of course, the differences are due to many factors including the competitive state of their sector, the changing allocation towards digital but also the wider uncertainty caused by Brexit. Thus, it’s hard to pick out an overarching trend other than the advertising dominance of the home media/telecoms providers and household goods manufacturers.”