The US Advanced Television Systems Committee (ATSC) has approved the final elements that complete the ATSC 3.0 suite of next-generation TV standards. 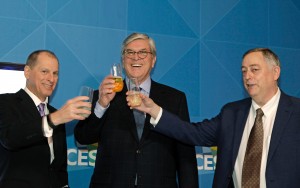 Gary Shapiro of the CTA, Gordon Smith of the NAB, and SCTE President Mark Richer celebrate the approval of the ATSC 3.0 at CES

The ATSC announced the release of ATSC 3.0 at CES in Las Vegas. According to the body, the new standards provide broadcasters with ew market opportunities through enhanced transmission and reception functionality and delivery of 4K Ultra HDTV, immersive audio, and interactive services using a mix of Internet and broadcast connections.

The release of ATSC 3.0 follows approval of the standard for use by broadcasters by the FCC in November. The regulator voted three to two to approve ATSC 3.0, with a split on partisan lines amidst concerns about lack of a plan for backwards compatibility with existing systems.

“Our suite of ATSC 3.0 standards paves the way for a new kind of television service, one that is far more flexible and adaptable than previous standards.  ATSC 3.0 will bring historic innovations to broadcasters and to viewers, from robust transmission to immersive audio, and from 4K Ultra-HDTV to interactive services and more.  The 20 individual standards that comprise the release of ATSC 3.0 will give broadcasters the ability to utilize new transmission methods and finally bring together innovations in both over-the-air and broadband services,” said ATSC President Mark Richer.

“ATSC looks forward to continuing work on the standard, including its deployment in initial markets and future enhancements.  We remain uniquely positioned to support the first trial launches of ATSC 3.0 services and products beginning this year.  In addition to our ongoing standards work, the ATSC has a very important role in educating stakeholders about how the technology works and assisting in implementation planning in the U.S. and other parts of the world.”