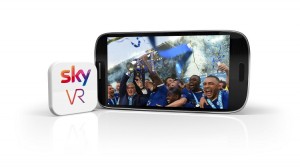 Sky first launched its dedicated Sky VR App in October 2016 featuring content produced by the UK operator and its partners, while Jaunt unveiled its XR Platform last month and is demoing it at CES this week.

“The viewing habits of our customers are evolving and, the appetite for immersive content is growing day by day,” said Gary Davey, Sky’s managing director of content. “Since launching the Sky VR Studio in 2016, we’ve been at the forefront of VR content creation – fusing together world-leading technology with the best storytelling and ideas.

“To deliver these experiences to our customers, we need the right platforms and technology. We’re excited to adopt the Jaunt XRP as it will let us take the next steps in our VR journey, helping ready the Sky VR App to handle the ever more innovative and complex VR experiences we will be creating.”

Jaunt International’s general manager, Dominic Collins, said: “Sky is an example of a media company that is already producing fantastic immersive content for their viewers, naturally we wanted to give them the tools to distribute those experiences in a seamless way across their own channels.

“Sky, like many broadcasters, has a huge opportunity to pioneer the way in which immersive content enters and enriches the lives of consumers all over the world and we’re excited to power that vision.”

The news comes after Sky struck a deal with Jaunt in October 2016 to launch a ‘Sky World’ section within the Jaunt app to distribute a selection of Sky’s news, sports and cinematic VR content. In return, Sky agreed to showcase four Jaunt VR experiences in its then newly launched Sky VR app.

The ties between the two firms go back even further, with Sky investing US$0.9 million (€0.8 million) in Jaunt in September 2015 as part of a US$65 million funding round that was led by The Walt Disney Company and included participation from ProSiebenSat.1. The deal took Sky’s total investment in Jaunt to US$1.65 million since 2013

Jaunt produces and distributes immersive virtual reality, augmented reality and mixed reality content via its production house Jaunt Studios and its distribution technology Jaunt XR Platform. The company was founded in 2013 and is headquartered in San Mateo, California.