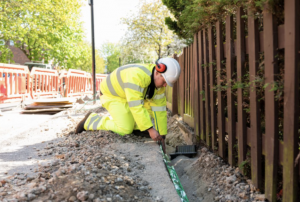 Liberty Global and Telefónica-owned Virgin Media O2 has added one-and-a-half million homes to its gigabit network, enabling it to make the claim that more than half of its footprint can now access ultra-fast broadband speeds.

The company has now upgraded its network in locations across the UK, including Bournemouth, Bristol, Northampton, Sunderland, Wolverhampton, Wigan and York.

By the end of 2021, Virgin Media O2 aims to deliver gigabit broadband speeds across its entire network of more than 15 million homes.

Gig1 broadband is available to new and existing customers and can be packaged with or without telephone, TV and mobile services. Prices start from jut £62 per month on an 18-month contract.

The company has committed to invest at least £10 billion over the next five years in the UK and says it is actively exploring options to deploy fibre to millions of additional homes across the country.

“We are upgrading the UK to next-generation connectivity and today we’re hitting another important milestone with more than half of our network now able to access gigabit speeds,” said Lutz Schüler, CEO.

“As the UK’s largest gigabit broadband provider today, with a clear plan to connect our entire network to these speeds by the end of the year, we’ll be delivering most of the Government’s broadband target ahead of schedule. Our continued investment is propelling the country up gigabit league tables and providing consumers with the connectivity they need both now and in future.”

At the end of last month Virgin Media O2 stated its intention to upgrade its fixed network to full fibre to the premises (FTTP) with completion in 2028.

This technology is capable of delivering symmetrical 10Gbps download and upload speeds and beyond, with the upgrade plan covering 14.3 million cable premises, after taking into account the operator’s existing 1.2 million FTTP homes.

Virgin Media O2’s commitment to upgrade to FTTP has been seen as presenting a significant competitive threat to BT, whose share price has slid by around 15% since Patrick Drahi’s Altice became the biggest shareholder in the operator in a highly-publicised move.

Among scenarios under discussion is the possibility of opening out the Virgin Media network to third parties under wholesale agreements. Liberty Global CEO Mike Fries has talked up the prospects of a wholesale move and hinted that this could be extended not only to new fibre-build areas but to Virgin Media’s legacy cable footprint. The group has reportedly held talks with Sky and Vodafone about wholesale.

However, a recent note from analysts at Jefferies poured cold water on the prospect of a tie-up with Sky.

Jefferies’ analysts said that they “would not rule out [Liberty Global and Telefónica] prioritising such a scenario over the long-run prospects of a retail business that would be severely undermined by diversifying into wholesale” but added that they “see no logical incentive for Comcast/Sky to commit itself as a VMO2 anchor tenant”.

According to the analysts, for Comcast, the pay TV operator’s owner, “the security of Sky’s increasingly streaming-focused retail activity is paramount and wholesale experiments create risk”.

BT is also overbuilding FTTP across Virgin media’s core legacy cable footprint, and a partnership between Sky and BT “creates a lower risk retail opportunity” for the pay TV operator, according to Jefferies.