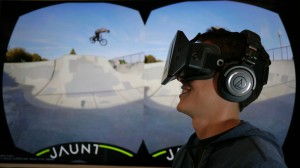 Disney has led a new US$65 million (€58 million) funding round in cinematic virtual reality (VR) firm Jaunt, with Sky also upping its investment in the firm and ProSiebenSat.1 coming on board as an investor.

Sky contributed US$0.9 million, taking its total investment in Jaunt to $1.65 million since 2013. It said that over the next 12 months it will work with Jaunt to film “even more original virtual reality content.”

Jaunt said that new round brings its total funding to more than US$100 million and claimed it is “the best-capitalised player in content creation and technology for cinematic VR.”

The company said the latest round of funding will enable it to “significantly scale up VR production” and advance its camera hardware and software production tools to deliver content to a wide range of mobile devices and VR.

“In addition, Jaunt plans to use the funding to significantly grow their teams in both their Palo Alto headquarters and their new Los Angeles studio,” the company said.

Stuart Murphy, director of entertainment at Sky, praised Jaunt as pioneers of Cinematic VR. “It’s been amazing working with them over the last two years as we begin to see the technology take off,” he said. “We are developing some exciting plans for how we can create some amazing viewing experiences for Sky customers.”

ProSiebenSat.1’s chief digital strategy officer, Hanno Fichtner, said: “The investment in Jaunt is an investment in the future of entertainment for ProSiebenSat.1. Virtual reality will trigger an entertainment revolution similar to what our core media of TV did. Jaunt is perfectly positioned in this market and has raised the quality of virtual reality experiences to the next level.”

Jaunt produces virtual reality content and releases this via the Jaunt distribution platform. To date, videos have been primarily available to watch through the Jaunt Smartphone app using Google Cardboard – a cover that transforms smartphones into 3D Virtual Reality viewers.

In the future, the content will be available on a wide variety of devices and headsets, including VR goggles like Facebook’s Oculus Rift.

Jaunt said that the addition of prominent global media and entertainment investors will enable it to “scale up content creation and technology innovation for Virtual Reality Filmmaking.”