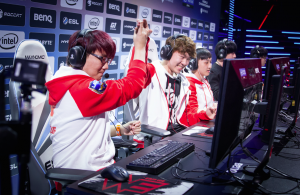 Speaking at the Connected TV World Summit in London this morning, Dean said that ESL also aims to expand its presence on local media platforms as well as other digital platforms.

Dean said the MTG had developed an eSportsTV channel behind a paywall “as an experiment”. Despite the challenges of getting viewers in the eSports target age group to watch paid-for content, he said that “engagement was expanding”. Average viewing time of content on the channel stands at 48 minutes. The ESL Pro League CS:Go 2016 tournament was the most visited programme. “To sit behind a paywall was an interesting experiment but it seems that engagement was there,” he said.

Dean said that ESL and its MTG-owned sister company Dreamhack account for 34% of eSports content produced on Twitch, which is still the main video channel for the discipline. Rival outfit Riot Games (League of Legends) has a 28% share, with the remainder divided between companies such as MLG, Beyond the Summit and others.

In the last six months, 80 million hours of eSports content from ESL has been watched globally, according to Dean, who added that ESL is the leader globally in creating live events.

He said that eSports, which has 292 million global viewers, is beginning to attract the interest of major brands. He said that branding around eSports is little different from other sports, with Gillette, for example, giving the same big budget advertising treatment to well-known eSports players that it does to famous footballers.