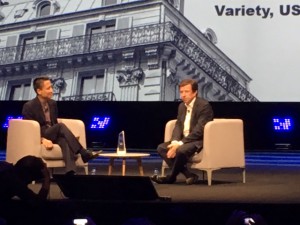 Gilles Pelisson on stage at MIPTV 2017

TF1 is working with partners in new ways to bring content to digital platforms, but remains wary about the ambitions and strategies of global internet giants, according to chairman and CEO Gilles Pelisson.

Speaking at MIPTV in Cannes, where he was presented with Variety’s 2017 Achievement in International Television Award, Pelisson said that TF1 had “mixed feelings” about competition and partnerships with digital giants such as Google, Apple, Facebook and Amazon – the so-called ‘GAFAs’.

He said that the broadcaster had not been able to agree the value of its coverage of the French presidential debate with Facebook. “It is about what they are willing to share as value,” he said. “When it comes to our domestic content…we need a different balance in the relationship.”

On the other hand, opportunities to use original content from digital companies is welcome, he said. TF1 has aired episodes of Netflix’s French original Marseille on its main channel as part of a deal with the streaming provider. He said the agreement brings audiences to Netflix and also gives TF1 the rights to view the series further down the road in a different window.

Pelisson said that it was necessary to adopt a flexible approach to content to compete internationally and claimed that TF1’s production subsidiary Newen had been “very smart” to produce period drama Versailles in English.

“It is easier if you have British actors and an international cast, but on the other side we have series like Profling… shot in Paris, which got sold in 83 countries. [Short-form drama] Bright Eyed Revenge, shot on the Riviera, was sold in 54 countries,” he said.

Pelisson said that French producers had evolved their offerings, for example in terms of timings, to make them more palatable to international buyers. He said that TF1 had also partnered with RTL and NBCUniversal to create procedural drama Gone.

“While there have never been as many US dramas, they are less powerful internationally in relative terms than before,” he said. Some shows had become “so sophisticated and complicated” that they are no longer appealing to local French audiences. He said he hoped agreements such as the one with RTL and NBCUniversal would help deliver content that meets the needs of the international marketplace.

Pelisson described investing in ProSiebenSat.1-backed multichannel network, Studio71, as “definitely a plus” for TF1. The alliance between TF1, ProSiebenSat.1 and Mediaset, announced earlier this year, will see a European version of the MCN launch in September.

Pelisson also said that TF1 is looking at bringing web influencers and ‘digital stars’ with appeal to younger audiences to mainstream TV, because some of them are likely to be the mainstream stars of the future.

TV in France is increasingly consumed in a different way than previously, Pelisson said, with replay TV now accounting to 15-20% of viewing of some of the best shows. However, he said that “most of the French population” will continue to watch TV. “The big difference is the younger generation which is watching less linear TV… but it’s about how to accompany them and make our content ubiquitous,” he said.

Pelisson claimed that some types of content are more suited to non-linear and non-TV viewing, such as scripted drama. “What we really want is to conceive most of shows so that when you go on the web you will be given some additional content,” he said. “You will find plenty of stuff…that you won’t see on linear TV.”

TF1 Group wants its flagship channel to maintain its leadership position in linear TV, he added. “We want to keep that power, but we need to fight the battle in a different way,” he said. “Today we are focused on commercial targets much more.”

He said that the group wanted to keep the flagship channel’s market share where it is but to develop thematic channels as “rendezvous channels” for specific audiences.