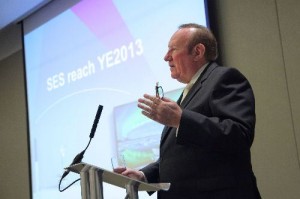 The future of British broadcasting is at risk from SVOD “insurgents” like Netflix and Amazon, and from the threat of widespread foreign ownership, according to Andrew Neil.

Speaking at the SES Satellite Monitor event in London yesterday, Neil – well-known as a broadcaster, journalist and the founding chairman of Sky TV – warned that British broadcasters in the future will be incapable of competing with global OTT services.

Sky, he argued, is the one company well placed to compete with the likes of Netflix and Amazon owing to its scale, budget and ability to re-invent itself. However, he claimed that 21st Century Fox’s planned £11.7 billion takeover of the 61% it does not already own of Sky, which Neil expects to be green-lit, will actually limit the company’s autonomy to compete effectively – as decisions about spending and resources will be made “in a board room in New York”.

“The culture secretary has referred the matter [Fox’s planned takeover of Sky] to Ofcom on plurality issues and on standards. It’s a half-hearted referral, I’d be very surprised if the regulators stopped this from going ahead,” said Neil.

“In the short run that may be no bad thing. Fox has huge resources. It could be quite a symbiotic relationship. But I can tell you, as someone who’s been in business for a long time, being a wholly owned subsidiary of another company is entirely different from being your own PLC, as a limited company in charge of your own destination.”

Discussing the BBC, Neil said that director Tony Hall’s pledge to make the iPlayer less of a catch-up service and more of a “must-visit destination” to compete with the likes of Netflix will not fundamentally benefit the public broadcaster.

“Making the iPlayer better, making it more of a destination, seems perfectly sensible to me. But it won’t make much of a difference to the BBC’s business model. It won’t give the BBC global scale, which is what the streaming services have.”

ITV, he said, had done a wonderful job in the past five to 10 years of “saving itself from precipitous decline”, but added that the commercial broadcaster’s problem now is “where does it go from here?”

“It is simply too small to be a global player, but the huge success of ITV Studios, in an age when there is an arms race of content, makes it a very attractive acquisition for the likes of Liberty Global or NBCUniversal,” said Neil.

He also claimed that it is difficult to see a future for advertising-supported public broadcaster Channel 4 other than as a small, niche broadcaster, operating in a “world of scale, expense and US$5 million-an-hour dramas.”

“When you look at the business models of the BBC, of ITV, of Channel 4, it is quite hard to see how they are responding, and how they can respond to this new challenge… We’ve now got these insurgents with huge budgets, global scale, global reach, and a commitment to quality just as strongly as public service broadcasting in this country – but with more money to do it,” said Neil.