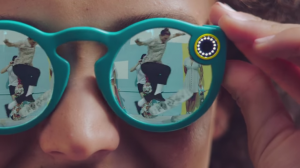 Snapchat cited traditional companies in the TV space among its competitors, as it filed papers for a planned US$3 billion IPO.

The firm, which described itself as a “camera company” in its S1 filing with the SEC, said it aimed to raise up to US$3 billion in a stock market debut that could value the firm at US$20 billion – US$25 billion.

The paperwork revealed that Snapchat has 158 million daily users, with more than 2.5 billion Snaps – short videos or images – created each day. It also gave an insight into where the company sees itself in an evolving media landscape.

“Our competitors span from internet technology companies and digital platforms to traditional companies in print, radio, and television sectors to underlying technologies like default smartphone cameras and messaging,” said Snapchat.

“We compete with other companies in every aspect of our business, particularly with companies that focus on mobile engagement and advertising.”

“We believe that as people’s attention shifts from traditional media like desktop and television to mobile, significant advertising budgets will similarly be transferred to mobile advertising,” said Snapchat.

“Additionally, this shift of attention to mobile is particularly prevalent among younger audiences, with people aged 18 to 24 – our largest age group among our US daily active users – having spent 35% less time watching traditional (live and time-shifted) television in an average month during the second quarter of 2016 compared to the second quarter of 2010, according to Nielsen.”

From a monetisation point of view, Snapchat predicted that advertisers will transfer their traditional ad spend to mobile to make up for “that lost reach and frequency”.

Snapchat said that “substantially all of our revenue comes from advertising” and claimed that the mobile ad market is expected to grow nearly three-fold from US$66 billion in 2016 to US$196 billion in 2020.

In terms of its own money making efforts, the company said its advertising business is “still young but growing rapidly”. For full year 2016, Snapchat recorded revenue of US$404.5 million, compared to revenue of US$58.7 million in 2015.

The company also said that it will not be selling voting stock, meaning its two co-founders – CEO Evan Spiegel and CTO Robert Murphy – will have control over all stockholder decisions.