Ofcom: BT the UK’s most complained about operator in Q2 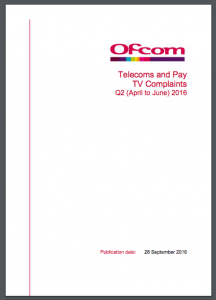 BT was the UK’s most complained-about pay TV operator in the second quarter, according to data published by broadcast regulator Ofcom.

For the three-month period from April to June, BT received 16 complaints per 100,000 customers – compared to seven for TalkTalk, five for Virgin Media and just one per 100,000 for Sky, which had the least complaints.

The total volume of complaints for UK broadband, landline, mobile and pay TV operators fell from Q1 2016, except for the pay TV sector where complaint levels remained stable, according to the research.

“Consumers have a right to expect good service and will rightfully complain when that standard isn’t met. If companies do fall short, we will step in and investigate, which can lead to significant fines.”