Movistar Colombia has surpassed the milestone of 20 million customers – the majority of them for its mobile service – and has grown its pay TV base by 80% to over half a million. 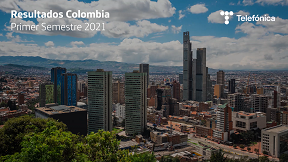 The Telefónica-owned operator said that growth in its fibre broadband base had boosted take up of its TV offering, which grew by 247,000, or 79.6%, in the year to June to end with 527,000 customers.

Telefónica Movistar Colombia announced an agreement with private equity outfit KKR in June to create a JV to build out fibre in 90 cities across the country. KKR will hold a 60% stake in the company, with Movistar holding 40%.

“The performance of the company during the first half of the year is the result of the established strategy of the company as well as the work of our team to guarantee the commercial growth of our main products, in the midst of the challenges presented by the situation of the country and the growth of competition in the sector. It’s worth highlighting here the recent agreement concluded with KKR that enables us to bring the benefits of our fibre offering to 4.3 million homes passed over the next three years,” said Fabián Hernández, president and CEO of Telefónica Movistar Colombia.