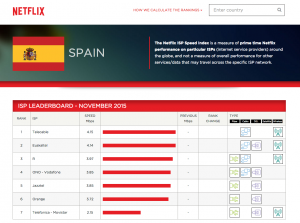 Telefonica was ranked bottom of Netflix’s internet service provider (ISP) speed index during the first month that Spain was included in the SVOD provider’s monthly study.

The November stats claim that Telefonica’s Movistar service offers connection speeds of just 2.15Mbps – the slowest in Spain and the fourth slowest in Europe overall.

The report follows heated debate in the Spanish press about the “war” between Netflix and Movistar, with Telefonica reportedly the only major operator in Spain to have not reached a peering agreement with Netflix.

In a statement published last month by digital publication Sabemos, Netflix said that it had started talking with ISPs in Spain long before its launch and offered them the possibility to connect its network without cost so they can offer a greater user experience to customers.

“We are aware of quality issues in the network of Movistar / Telefonica,” Netflix reportedly said.

In Netflix’s November ISP speed index – which is a measure of primetime Netflix performance via a particular provider – Irish ISP Imagine was ranked the slowest in Europe with speeds of 2.01Mbps, followed by Austria’s A1 at 2.10Mps and Italy’s Linkem at 2.12Mbps.

The fastest ISP in Italy – another recent Netflix launch market – was Fastweb at 3.59Mbps, according to the study. Portugal’s fastest ISP was found to be Cabovisao at 3.67Mbps.