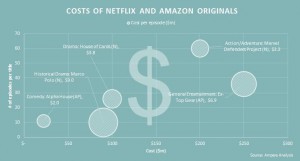 Amazon and Netflix’s combined content spend will top US$9 billion (€8 billion) by end 2020, according to new research.

Ampere Analysis says Netflix alone will have over 130 million subscribers around the world within five years and the streaming service’s annual content spend is expected to rise.

Ampere Analysis says the US streaming service will up its programming spend from US$5 billion to US$6 billion over the next couple of years. It will, however, actually reduce spend on acquired fare with the increase coming from budget allocated to original programming.

Netflix wants to spend 50% of its content budget on originals, Ampere noted, adding that the amount it devotes to acquisitions could start falling from 2017.

The streaming service had 63 million paying subs at last count and Ampere says that it will have “at least” 130 million by end-2020.

At that point its nearest rival, Amazon Prime Instant Video, will have about 50 million users.

There is also crossover between the two services. In the US, UK and Germany half of all Amazon Prime subs also take Netflix, Ampere said. However, the growth of both services is bad news for traditional pay TV operators, as customers churn for cheaper and more flexible SVOD alternatives.

As the rate of pay TV subscriber additions slows, Ampere says that 2015 will be a record year in terms of new SVoD subs.

With Netflix focused on newer (acquired) TV and film titles and Amazon a having a wider array of less recent content, the services are differentiated to the extent consumers can justify having both, Ampere said.

Richard Broughton, research Director at Ampere said: “The differing title acquisition strategies have allowed each provider to thrive in its own content niche – consumers are quite happy to spend on both Amazon Prime and Netflix. Netflix subscribers across the US, Germany and UK are over 60% more likely than the average internet user to also watch videos via Amazon Prime.”