TV Everywhere viewing up 63% in the US 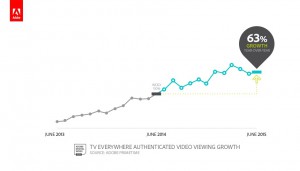 TV Everywhere viewing in the US was up 63% year-on-year in the second quarter, according to Adobe’s latest Digital Video Benchmark report.

Authenticated viewing on TV-connected devices, such as Apple TV and Roku, grew 110% year-on-year, though Adobe said this growth is slowing.

“What we’re starting to see is that potentially some of the friction in the process of setting up TV Everywhere or figuring out which device you want to use might be starting to cause a slowdown,” said Tamara Gaffney, principal analyst for Adobe Digital Index.

“We think generally the demand is there, but we may have reached a tipping point where to get to the next level it needs to be simpler to sign in.”

The Adobe report said that the iPad was the number one device that consumers used to view TV Everywhere content, with some 22.3% using an iPad to do so. Second on the list were PCs at18.3%, followed by iPhones at 18.2% and Apple TV at 12.8%.

In total Apple accounted for up to 61% of TV Everywhere viewing, according to the study, which claimed that Apple’s install base “paves the way for an all-in-one solution from Apple.” This follows reports that “Apple will make some sort of announcement in September about a streaming TV service, which could spur a major growth cycle for TV Everywhere.”