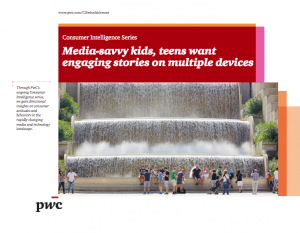 Kids aged 8-18 spend an average of 15.5 hours a week consuming media content, with the time spent increasing among older kids, according to a US study from PricewaterhouseCoopers.

Over half of 8-11 year-olds – 53% – said that streamed TV was their favourite type of programming, while 51% said games. Streamed TV was also the top activity for 12-14 and 15-18 year-olds, followed in each case by drama or reality series on cable channels.

Despite the advance of on-demand viewing, watching network TV shows on TV was the most popular activity among the sample, with 79% saying they engaged with this type of media. This was followed by watching movies on TV, cited by 69%, along with other types of TV content such as drama or reality TV shows. Sports, live events and news came last among TV formats, cited by 60%, 53% and 57% respectively.

Commercial advertising remains the main way that kids find out about new content, followed by personal recommendations from family and friends, with social media trailing third.

Awareness of media brands was high among the sample, with Disney topping the rankings with 85% awareness, followed by Nickelodeon and Cartoon Network. This trio of traditional media names was followed in awareness by three ‘new’ media brands – Amazon, YouTube and Netflix, with 80%, 79% and 78% awareness respectively. However YouTube and Netflix ranked higher than the top traditional media companies in terms of the interest they generated, with 38% saying they were interested in YouTube content, compared with 27% interested in Disney content.