Streaming media player ownership to hit 40% in US 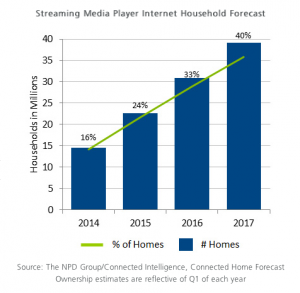 Streaming media player penetration is set to reach 40% of US broadband homes by 2017, with these devices to be found in some 39 million households, according to research by NPD Group.

The research firm predicts that streaming media player ownership will grow from just 16% of US internet homes in the first quarter of 2014, to 24% in Q1 2015, thanks in part to recent holiday purchases.

“In its infancy, the streaming media player market was driven by growth from Apple and Roku, but over the past year and a half Amazon and Google have made a significant impact,” according to NPD.

By including streaming media players alongside other web connected platforms – such as TVs, video game consoles and Blu-ray players – NPD predicts that the total number devices delivering apps to TVs will reach 211 million by Q1 2017.

However, among these device platforms, streaming media players are forecast to contribute the most growth.

“Over the coming years we will continue to see a growing audience of TV viewers for streaming video services, authenticated network apps, and offerings such as CBS All Access that no longer require a pay TV subscription from a cable or satellite provider.”